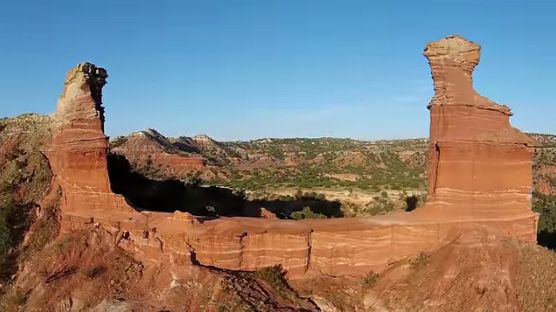 “I recently spent four days camping at Palo Duro Canyon State Park in North Texas. School was back in full swing so the swarms of visitors were considerably less than usual but I wish the local Amarillo “weather predictors” had been a bit more precise. The forecast had called for one cloudy day with a 30 percent chance of rain out of the four days I was there. On day one thunderstorms brought in high winds, horizontal rain and pea sized hail which flooded a low water crossing and cut off my campsite from the main part of the park. When the Park Rangers finally got to me the next day they followed me out to ensure I made it across the flooded road to high grounds. For the next three days it was a mixture of 110 degree heat and afternoon thunderstorms which rolled in like clockwork. Finally on the fourth day I was chased out of Palo Duro Canyon with the threat of severe thunderstorms accompanied by ping-pong ball sized hail. Fortunately, Mother Nature saw fit to give me a break in between storms to capture some of her aerial beauty and amazing sights of Palo Duro Canyon.” – Ric J

The Online Shop is new, so Artwork & Products are being added every day. All of Ric’s Fine Art Photography may be purchased on any of these products. Check out his Fine Art Gallery and if something you like isn’t yet available in this shop, please submit a request for any Photo Art Product you would like to be created for your purchase. Thank you!

Copyright protection is applicable to all Photography by Ric Johnson and website contents. Unauthorized download, copy, print, or use whatsoever of the photos, concepts or designs contained within this website is strictly prohibited by law.